skip to main | skip to sidebar

One Night at Fenway

We walked through the gates of Fenway Park on September 1st at 6:30 PM. Tickets scanned. Bags checked. ID ready (the first stop, after all, must always be the beer stand). 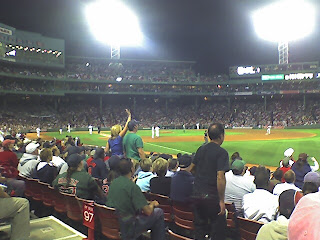 Of the many, many things I love about my father, the fact that he has four season tickets to the Red Sox ranks pretty high during baseball season. And he is extremely generous with his tickets, always making sure that each of his four children has the chance to take in a few games at Fenway.

Still, back in mid-July, when he told me I could take the tickets for the September 1st game, how could I have guessed that I would soon be witnessing history?

As my husband and I took our seats, I asked him who was pitching.

I have to be honest, I was a little disappointed. Sure, my parents had been at Fenway on August 17th, when Buchholz had pitched his first major league game – and won – against the LA Angels. But I knew that since then, he had been back with the PawSox, and not really standing out.

I had been hoping to see Daisuke Matsuzaka or Tim Wakefield or Curt Schilling – you know, the big names. Clay Buchholz? Eh.

Of course, within a couple of hours I would be singing a different tune.

We started to realize around the 6th inning that something special was going on.

The two college kids (with thick Bawston accents) behind us were discussing it – “Dude, Buchholz has a no hitta goin’ on heah.”

Then I got a text from my dad in the 8th inning – Can you believe what you’re seeing!?

You must understand, my dad is the definition of a die-hard Red Sox fan. When he was a teenager in the 1960’s he would hitchhike up to Boston just to stand outside of Fenway. Hoping to get a glimpse of Carl Yastrzemski or Tony Conigliaro. Hoping to catch a ball that made it out of the park.

So I felt it was my obligation as his daughter to truly and fully appreciate the significance of this game.

The stadium was wild. “Sweet Caroline” was sung with more gusto than ever before. The Wave went around an unprecedented 10 times. The sounds of “Hot dogs here!” and “Get yer peanuts!” were nowhere to be found. The vendors were engrossed in the game, too. 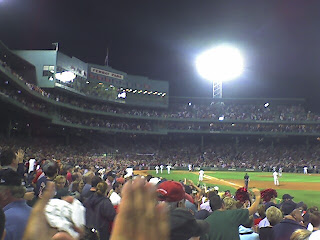 Everyone in the stadium was standing at the top of the 9th. Cheering, clapping, giving high-fives. Camera flashes lit up the crowd.

And then Buchholz threw the final strike to Baltimore’s Nick Markakis, who watched it go by.

Mayhem ensued. The excitement and camaraderie both on the field and in the stands was akin to a play-off series win. It was truly awesome. No other word could describe it.

I am so glad we were there. 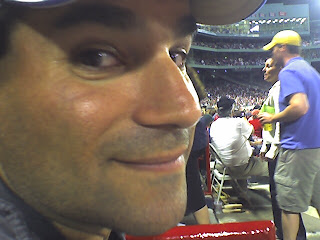 I must issue a disclaimer. My husband is a Yankees fan. But as long as Boston isn’t playing New York, he has agreed to humor me and cheer for the Sox. Besides, I don’t know if my dad could hand over his tickets to someone who would be rooting against the home team – son-in-law or not. That would just be wrong, wouldn’t it?
Posted by PinksandBluesGirls at 9/03/2007 01:32:00 PM

This gave me goosebumps! Lucky you!

You are the fourth person I know that was at that game. How lucky!

Your husband must be something special if you married him in spite of his being a Yankees fan. I'd have had to think long and hard about that one.

I am so jealous! Lucky you to get to witness a piece of Sox history in person.

Wow! My husband nearly died when we came home from our date night and found out what had happened! He couldn't believe he missed it.

I'm not a huge baseball fan but this even made my eyes tear up and gave me goosebumps. So glad you could witness it live!

My husband was at the game ON FRIDAY NIGHT. Bummer, dude.

We watched Buchholz from home. Your play-by-play was technicolor. Thanks for sharing.

Your husband was undeserving to be at such a moment in Red Sox history. ;-)

You are SO lucky! First, to have a father so generous with his season's tickets. And would he like to adopt me? And second that you got to see this game. This is the one you'll tell your grandchildren about (if you have them!). It was astounding!

color me green. we were there on Sunday :)

Those are some good seats! We watched it on TV when ESPN cut into something (a football game?). Honestly, it made me nervous to watch. Don't know if I could have stood it in person.

Great post. And those accents...I rarely hear them down here in the South.

I stumbled upon your article by accident, I was searching for the significance behind 'Sweet Caroline'......first I must admit that like your husband I am a Yankee fan, but even so that no-hitter was an amazing sight....my boyfriend(a Red Sox fan) and I started watching the game and we were like who's this guy??!! Now we will never forget him:) So maybe you can give some advice....we are headed to Boston this weekend to watch the Sox/Yankees at Fenway.....can our relationship survive this??!! haha

WHO ARE THE NEW ENGLAND MAMAS

Welcome to the blog for New England Mamas, a place to virtually meetup with other mothers who blog from around the NE. No blog? No problem! Leave us a comment on whatever post catches your eye. We'd love to hear from you!

The NE Mamas are a group of dynamic, intelligent women from all over New England who have a lot to say about everything from parenting to politics, social change to education reform, living better and playing harder, and everything in between.

If you have any comments, questions, or concerns regarding the New England Mamas or a particular post please email them to Tania at NEMAMAS [at] yahoo [dot] com.


*The New England Mamas are currently looking for one to two contributors from Vermont and from Maine. If you're a mom who writes from either of those states please contact Tania at the above email and put "Vermont contributor" or "Maine contributor" in the subject line.*